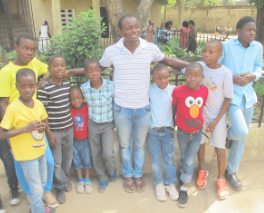 In the Northwestern part of Haiti where Cap-Haitian is located there are not a lot of options when it comes to finding dairy. Milk is not to be found easily unless you are willing to travel five hours to Port au Prince or happen to know someone with a cow. Most often, the only way the children receive dairy is through dried milk that is sprinkled over their cereal or supplemented into other food. Cap-Haitian resident Enock Compere has a plan to change that.

Enock is well-known in the area, especially at Joshua House, the IDADEE children’s school and EBAC orphanage because he is always willing to lend a hand when needed. Whenever possible he will work as a translator for the medical teams during their stay at the Joshua House. Now 25, Enock was originally brought to the orphanage by his mother when he was three years old. Having grown up in the orphanage, Enock is determined to make a difference not only for himself but for those around him. His goal is to start a dairy farm that can provide much needed milk to the children of Cap-Haitian. He hopes to be able to provide much needed milk to the Cap-Haitian residents and also provide job opportunities. In an effort to reach his goal, Enock put together a business plan proposal and left it at the Joshua House where he was hoping someone would find it and be inspired to help him.
God heard his prayer.

Back in the United States, Chad Wright’s daughter Alivia was nearing her 13th birthday in 2016 and he was looking to do something special for her. While Chad and his family are believers, it was through their relationship with Jewish friends that the beauty of the Bat Mitzvah tradition was revealed, which celebrates a young girl’s transition to adulthood. In this spirit, Chad decided to organize a father/daughter trip to Haiti with a group of other fathers and daughters. The goal of the trip was to help these fathers expose their daughters to other cultures and show them that as they grow older and enjoy more freedoms, it is also important that they understand their role and responsibility in the larger world society.

The original trip was delayed due to Hurricane Matthew, but Chad and his daughter eventually traveled to Haiti June of 2017 with the group. During their two-and-a-half week long trip, they stayed at the Joshua House and spent time at EBAC, and IDADEE.

The trip had an enormous impact on both Chad and Alivia, leaving them both with the feeling that God was calling them to do more. One night during their stay at the Joshua House, Chad discovered Enock’s business plan. After reading it over he shared it with his daughter and they decided they wanted to meet Enock and hear more about his plans. A few days later they met and God’s plan was in full swing.

“My family foundation, Mission Launch, was looking to come alongside an aspiring entrepreneur and give them capital and guidance to help them prosper in a business endeavor that would benefit the Cap-Haitians. I was looking for someone who was a natural leader and who had some skills to make the project a success and there was no doubt Enock was who we were looking for,” said Chad. “After meeting Enock, Alivia also felt very called to help him and since then she has been the driving force behind the efforts.”

Alivia recently spoke at the annual Jubilee Conference of the Coalition for Christian Outreach which helped Mission Launch raise significant funding for Enock and his farming aspirations. “I believe that I have been called by God to share my gifts and treasures,” said Alivia to the crowd of more than 5200 people at the Jubilee.

Under Chad and Alivia’s direction Mission Launch is assisting Enock to purchase a truck that he will be able to use throughout the Cap-Haitian area to perform hauling and other activities to raise funds which he plans to use toward the purchase of farmland. Mission Launch plans to continue to support Enock through fundraising efforts and business development guidance.